For parents in Philadelphia, vaccines for children are a top concern. Our providers often get questions about vaccine schedules, natural immunity, and the safety of vaccines. We understand it can be difficult to find reliable, evidence-based information on vaccines. We’ve compiled our most frequently asked vaccine-related questions with answers from a physician to help you navigate this issue. 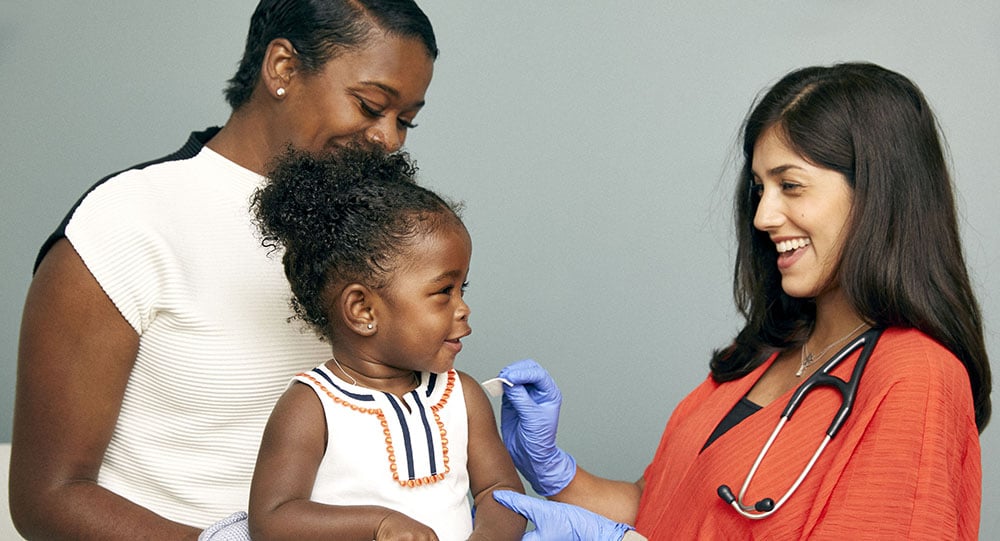 Vaccines are one of the greatest public health achievements of the 20th century. Diseases that were once the most common causes of childhood death and disability in the U.S., such as smallpox, diphtheria, polio, and rubella, have faded from memory.  As the immune protection of the community (“herd immunity”) strengthened through widespread immunizations, vaccine-preventable diseases began to disappear.

Unfortunately, vaccines have become victims of their own success, with generations growing up without experiencing these dangerous and often untreatable diseases firsthand, leading many to take for granted the protection that vaccines first created. As a result, vaccine myths have spread as easily as the diseases they prevent, leading some parents to choose not to vaccinate their children.

As pediatricians, our mission is to protect the well-being of our patients by providing the best healthcare possible. Having treated thousands of children in Philadelphia, our healthcare providers have seen first-hand the harsh consequences of pertussis (whooping cough) in young infants, bacterial meningitis and sepsis in young children, and severe pneumonia with respiratory failure from influenza in healthy school children. These vaccine-preventable diseases are not theoretical, nor forgotten, to us. We’ve felt the weight of grief from parents who realized that their child’s suffering was preventable. As parents ourselves, we would do anything to protect our own children from harm.

So, let’s talk about why vaccines are one of the most safe and valuable ways that we can achieve that goal.

Our Most Common Vaccine Questions at Center City Pediatrics, Answered

Think about this scenario: An unimmunized child travels to a popular tourist attraction where she is unknowingly exposed to measles. The virus infects her body, and a few virus particles soon multiply into millions. Ten days later she develops high fever, runny nose, pink eyes, and cough. A rash begins to develop, covering her whole body. She develops difficulty breathing and is hospitalized with pneumonia. Fortunately, after two weeks the child’s immune system begins to rally. She’s developed immunity in the form of antibodies and white blood cells that now are trained to specifically recognize and fight measles if she’s exposed again. What was the cost of that natural immunity? Two weeks of missed work (for her parents) and school (for her), doctor visits, hospitalization, and now her infant sister and other children in the doctor’s waiting room have been exposed. Still, this cost was fairly light compared to other known complications of measles.

In contrast, vaccines provide the immune system with the chance to develop the antibodies and immune memory that provide long-term protection, without the cost of suffering the disease. How does it do this? Generally speaking, vaccines use the parts of a germ that stimulate a protective immune response, while leaving out the parts that make you sick. Different strategies are used depending on the germ, but the principle is the same. While we don’t have vaccines for every infection, we do have vaccines against many of the germs causing the most serious and contagious infections.

Due to vaccines for hepatitis A, hepatitis B, varicella (chickenpox), rotavirus, pneumococcus, and Haemophilus influenza type B (Hib), rates of infections, hospitalizations, and deaths from these diseases have all dramatically decreased. Some vaccines can even lead to immune responses that are actually better than natural infection, including human papillomavirus, tetanus, Hib, and pneumococcal vaccines. For example, young children (who are most at risk of serious Hib and pneumococcal diseases) are unable to make effective immune responses after natural infection with Hib or pneumococcus and can become infected again and again. However, young children develop excellent immune responses after receiving the Hib and pneumococcal conjugate vaccine series.

2. Don’t Too Many Vaccines Overwhelm the Immune System?

In 1980, there were only 7 diseases that children were routinely immunized against in the first year of life. In 2019, there are 14. It’s easy to think that with this many vaccines today, it must be overwhelming to the immune system. Why isn’t this the case? A baby – previously living in the relatively germ-free environment of the womb – encounters billions of germs shortly after birth. This exposure continues as the baby feeds, breaths, and interacts with its environment. These germs will make a home on the surfaces of the skin, nose, throat, and intestinal tract. In fact, 10 times more germs live on the surfaces of our body (100 trillion) than the number of cells we have (10 trillion)! All of these germs have the potential to cause infection, and each germ contains multiple components (“antigens”) that trigger immune responses. But from the earliest days, babies are capable of an immune response that keeps these germs at bay.

In 1980, the number of antigens in the vaccine series for the first year of life was > 3000.  But in 2019, the number of antigens in the current infant vaccine series is about 160. How can this be? Vaccine science has advanced so much so that we are now able to be more specific in identifying which antigens are necessary to create protection against disease. The immune challenge from the first year’s vaccines is a drop in the bucket compared to what an infant faces just by leaving the womb!

It comes as no surprise, then, that children vaccinated against measles have a lower risk of non-measles infections compared to children who have suffered natural measles – an effect seen in both richer and poorer countries . In another example, natural influenza (“flu”) infection, apart from directly causing pneumonia and ear infections from the virus itself, also makes the body more prone to secondary bacterial respiratory infections shortly after a flu illness, including bacterial middle ear infections, sinus infections, and pneumonia. By vaccinating our children against the seasonal flu virus, we can reduce the risk of these chain-reaction secondary bacterial infections and unwanted antibiotic exposures.

Click here to read more about vaccines and the immune system.

3. What About Alternative Vaccination Schedules?

When a patient with a medical condition (for example, diabetes) is prescribed a drug to treat the disease, that drug may have significant side effects. Given the risks of untreated diabetes, the benefits of using that drug outweigh the potential risks.

Childhood vaccines, however, are different from drugs: they’re given to healthy children in order to prevent disease. Any risk for serious adverse effects must be extremely low to justify their use in healthy people. Because of this, vaccines in the U.S. are tested more thoroughly than any drug before licensure, have higher regulatory standards than drugs, and have two separate complimentary continuous safety monitoring systems to detect any new safety issues after licensure.

Vaccines may cause mild and temporary side effects such as fever, pain, or swelling, but serious adverse effects are rare. Vaccines definitively do not cause autism, infertility, multiple sclerosis, leukemia, or diabetes. Vaccines will cause peace of mind, however, knowing that while there are many things we might worry about for our children, 14 significant childhood diseases are not going to be one of them! The choice to not vaccinate is a choice to take a different risk.

We know you may have more questions about vaccines. One of the biggest challenges for parents is identifying reliable, evidence-based information, beyond anecdote and hearsay. As trusted partners in your child’s health, we are always here to help answer your questions. We also encourage you to explore these resources below:

Every Child By Two

Centers for Disease Control and Prevention