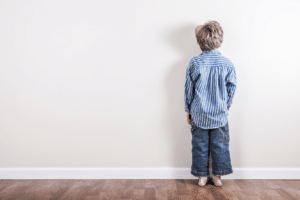 I don’t remember exactly what he did—one of the usual offenses—hitting, biting, spitting, or persistent obstinacy. It could have been any of these, but it was clear he needed to learn a consequence. The problem was that I was at the beer store trying to pick up some evening relief.

Why not? I thought as I grabbed him by the arm, sat him in front of a large cooler, and pulled out my iPhone timer. One of the other customers looked upon him with pity, but I just kept on with my purchase. When the time sounded, I asked him if he needed a hug, reiterated that I did not like his behavior, and brushed off the disparaging looks of the other customers, who were wondering to whom he belonged.

As a pediatrician, I am constantly hearing that “Time out doesn’t work,” “He won’t stay there,” or “We never have a place to put him.” A brief look at early-childhood development leads me to believe these claims rarely (there are always exceptions) make sense. If a child has succeeded in developing healthy attachments during his or her first year of life, they will crave, more than anything else in the world, attention and engagement from the people in their life. In other words, during their first year of life, children learn that people in their life are responsive to their needs. They learn to enjoy them and want their attention. Subsequently, taking away this attention is a consequence they do not like. Time Out is simply this: a process by which a child’s action leads to an undesirable consequence, removal of attention.

Time Out has other benefits. It sends the message to the child that they need time to self-regulate and reflect. It also gives the parent “time out” to regroup.

The key to successful Time Out is the same as one of the keys to successful parenting in general: love passionately and parent dispassionately. Toddlers are funny—even when they are making a move toward that forbidden power outlet, taking a favorite toy from their sibling, or throwing their peas at the dog. Undoubtedly, 12 years later they will be infuriating. However, if you allow them to see your emotional response, they will enjoy this power to affect you. Time Out, when preceded by a chuckle, will be lost on young children because of their difficulty with understanding time sequence. They may have ended up in a corner, but the immediate consequence of their action was a smile.

So, what are the key factors to make Time Out worth your time?

How To Put A Child in Time Out

Time Out can be done in any boring place. After all, the concept simply calls for separation to demonstrate to your child that their actions led to an undesirable consequence—isolation. In front of a beer cooler worked fine for my son because he really didn’t care which brand I choose to drink. At home a regular Time Out spot is convenient. Ideally, this is a corner with a chair with arms to encircle the young offender.

What happens if your child does not yet understand that this is a place for solitary contemplation? Unless he is destined for a monastery, I am fairly certain he will not. You will need to hold him there the first few times or send him back to his spot as he tries to sneak away. The key here is to do it firmly, quietly, and, once again, dispassionately. A practice run during a period of calm may go a long way toward preventing future elopement.

Most children learn quickly that the time passes quickest when they comply, particularly if they are already familiar with the concept of Time Out, and if they know you mean business. Rarely, a child needs to be put behind a gate or in his room for Time Out. In these cases, even if they start to play with their toys, the abrupt separation from attention will likely have the desired effect.

Time Out needs to be long enough to show the child that their actions lead to an undesirable consequence. Typically, the amount of times is 1-5 minutes, corresponding with the child’s age. This is most effectively set with a timer, preferably one that the child can hear ticking. If the child escapes, they should be quietly told that time must begin again and escorted back to their spot. Far more important than the length of time, however, is that it immediately follows the undesired action. Delaying Time Out never works because children do not yet possess a concept of time sequence or future impact.

Aside from representing a consequence for negative behavior, Time Out provides an opportunity for the child (and the parent, for that matter) to learn self-regulation. With stress hormones raging during the height of frustration and anger, our “thinking parts” of the brain cannot process lessons learned. The end of Time Out offers a moment to quickly state a lesson (i.e. Remember, No Hitting). The consequences of his actions have already played out; so dwelling on the subject is generally not helpful.

If the child is so upset that processing the event is impossible, asking, “Do you need a hug” may be helpful. Aside from assuaging parental guilt, this tells the child that you still love them even when they do bad things. It also shows them that they can use other people to help regulate their emotions.

Some children may eventually see “Time Out” as their “thinking place” or “cooling off zone” and will voluntarily elect to go to their spot.

Time Out does not work for all children. Children with serious problems with social connection or mood regulation may not respond to the isolation of Time Out. However, most of the time failures of effective Time Out stem from two main caregiver shortcomings: inconsistency and failure to provide enough “Time In”.

If caregivers are not clear and consistent on what deserves Time Out, children will not learn that the natural consequence of certain actions is undesirable. They will be confused. Therefore, parents need to communicate with each other and all other caregivers, including daycare providers, about what actions deserve Time Out.

Similarly, if the threshold for punishment is too broad or too low, children will fail to take the punishment seriously. Some caregivers fall into the trap of providing more “Time Out” than “Time In.” In other words, if the concept depends on the notion that children crave attention from their caregivers and involvement with others, they will no longer care if this attention or involvement is not pleasurable. This is, indeed, a sad downward spiral leading to oppositionality from the child and frustration in the caregiver.

Clearly, as with all tasks of parenthood, this is easier said than done. Good luck! Just keep trying to love passionately and parent dispassionately. Keep your eyes on the long-term goals and away from all those know-it-alls staring at you and your screaming children.