Is it safe to keep firearms in the house? Should I let my child play with toy guns? The answers to these kids and gun safety questions will be different for everyone, but all parents should understand the best practices for gun safety and storage. 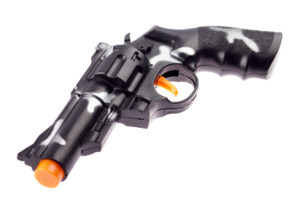 I am sure it is probably a cliché to talk about one’s youth by saying, ‘Things were different back then.’ Truthfully though, they were. When I was a kid, my mother would not allow my brother or me to ever have any kind of toy gun, water gun, games with gun-like things in them or any other form of entertainment that might involve shooting. Of course, video games were not as prevalent then, let alone smart phones or tablets with limitless gaming that involved shooting guns, lasers or anything similar. Sure, plenty of television programming and movies included gun violence, just as today. Meanwhile, going to other kids’ homes created an interesting decision for me to make. Was it ok to play with their toy guns? No doubt that I occasionally took part in whatever my friends were doing. But, I did it with a certain amount of guilt. Maybe it was just that this was forbidden fruit.

Today, I have come to realize that the idea of removing any representation of a gun from our home is a nice thought, but ignores the reality of the world we live in (sorry, Mom.) The truth is we live in a very complicated world. When it comes to guns, there are the haves, and there are the have not’s. I have no interest in talking here about the politics of guns. For now, it is our reality. Some parents grew up in homes where there may have been a gun, or many guns. Other folks have never had one, never wanted one and never plan to have one. Both choices are valid. Despite these differences, we all have to live with the consequences of guns and gun violence.

After considering the realities of these consequences, I hope to be able to shed some light on some simple measures gun owners may take to provide better gun safety.

Firearm-related deaths are 1 of the top 3 causes of death amongst American youth today. Fortunately, those numbers are down from 20 years ago. Despite that, the United States has the highest rate of firearm-related deaths among high-income countries in the world. Access to guns combined with unsafe storage practices creates increased risk for seriousunintentional injury and death. In fact, in just the last three years in Pennsylvania alone, 22 children were victims of unintentional shootings – 8 of them were killed.

Gun Safety in the Home

Preventing firearm injury requires some forethought and vigilance. People choose to have guns for a variety of reasons – self-defense, recreation/hunting or for professional reasons like law enforcement or the military. Having the freedom to own a gun is a big responsibility. In order to meet that responsibility, the American Academy of Pediatrics has continued to promote gun safety.

Here are a number of gun safety methods to consider:

As a parent, there are things we can do to reduce the risk of a gun-related injury. Make it clear to a child (in an age appropriate manner) that guns are not toys, and are never to be handled by any child. The mantra used by gun safety experts if you ever see a gun is:  Stop. Don’t touch. Run away. Find a grownup.

For more information, consider reviewing this link as a guide to discussing gun safety with your child: http://www.projectchildsafe.org/talking-to-kids

Also, here is another interesting site that introduces what to discuss with children about gun safety, provided by Nemours: http://kidshealth.org/en/parents/gun-safety.html