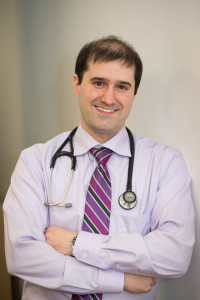 For Dr. Reza Madani, joining Center City Pediatrics seems like his destiny. He has truly come “full circle.” How else can we explain that the very first baby he saw with our practice was in the same room at Pennsylvania Hospital in which he was born!

If this isn’t strange enough, unbeknownst to him, his mentor at St. Christopher’s Hospital for Children, where he trained, was Dr. Berger’s close friend and colleague from Atlanta. Also, like Dr. Berger, Dr. Madani, has traveled the world (over 20 countries), been on medical brigades, and worked extensively with children with special needs.

Now, he loves the Philly restaurant scene (and can even order in fluent Italian). You might also catch a fleeting glimpse of him running along the Schuylkill. If you see him, feel free to join him because he enjoys the company. However, be prepared to run far. He may be training for another half-marathon.

Needless to say, Dr. Madani is now thrilled to work with children in his community at Center City Pediatrics. He looks forward to combining this “village” approach with his up-to-date pediatric training that he brings to our practice.