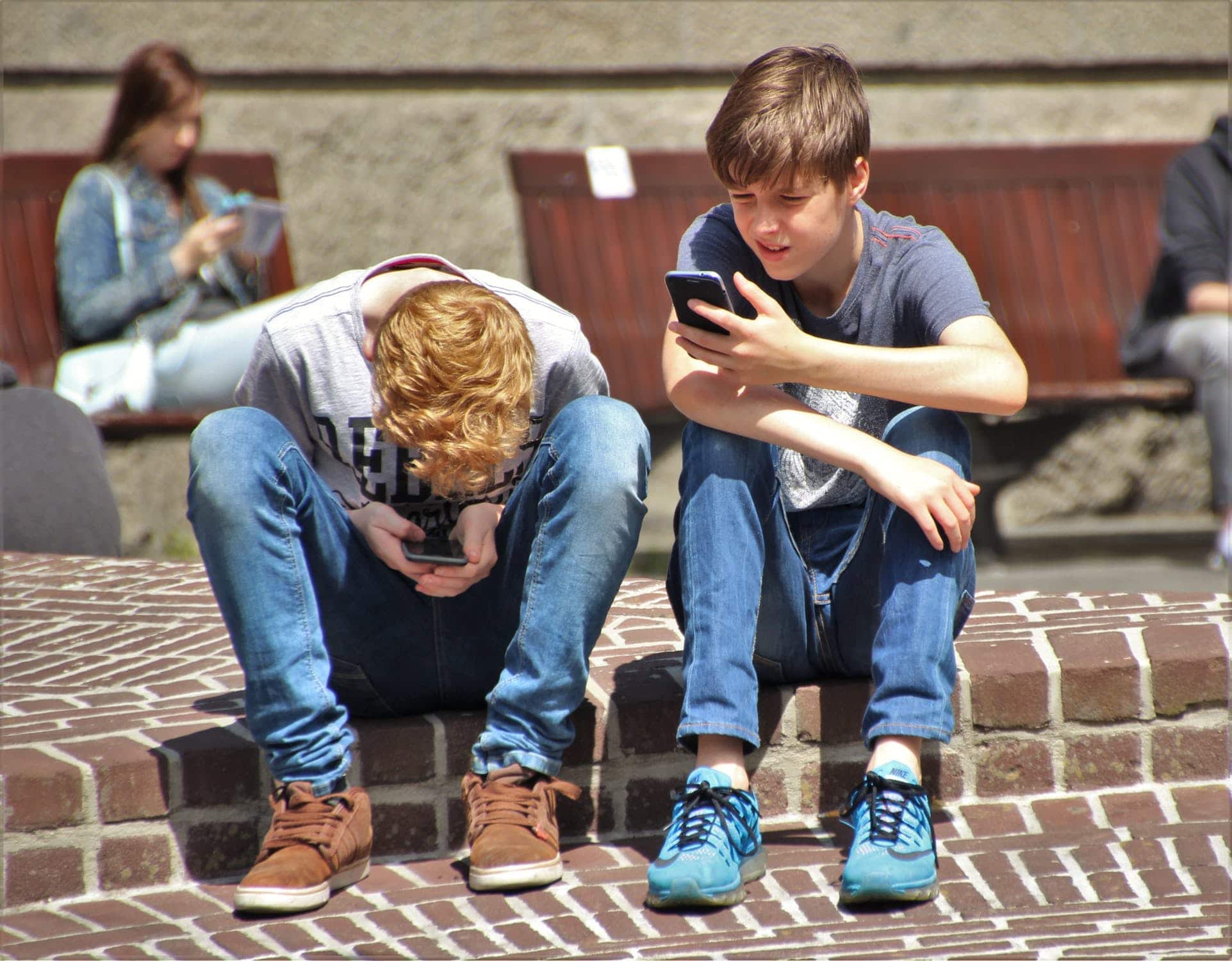 Confession #3: I love my iPhone.

I love it so much that I check it first thing in the morning, before I go to bed, and many times an hour during the day. I am not proud of this, particularly when my 9-year-old son mocks me, or even worse, when he wants to imitate me and steals my phone. However, I do not think I am that atypical. In June 2007, the world changed. I did not think much about it at the time when I saw the then mayor of Philadelphia, John Street, leading the pack to line up and purchase the first iPhone. I was content with my Palm Pilot. But from that point on, screens became ubiquitous—content, social media, texting, gaming, and emailing spread throughout our society like an airborne plague. Fifty years from now, we may look back on this date—June 29, 2007—as one of the single greatest public health tipping points in history.

Today, American youth spend more time with media, primarily digital media, than any other waking activity—an average of 7.5 hours per day, nearly 1/3 of their day. The impact of this “screen revolution” is challenging to decipher. Undeniably, we are affected by digital media’s seemingly infinite content, the addictive draw it has on us, its infringement on other ways of spending time, and the multitasking demands it places on us. It affects our ability to relate to others, to sustain attention, to self-regulate, and it possibly even changes our neuroanatomy. Research is only now starting to understand the degree and nature of its impact.

“Just Google it!” Fifteen years ago, this phrase would likely have drawn confused “googly-eyed” stares. Now, the process that this phrase represents is the window to the world. However, it is also the window to endless products to buy, celebrities to emulate, friends to check on, strangers to stalk, and even explicit sexual imagery at which to gawk. Social media sites like Facebook and Instagram invite us to share the highlights of our social experience, down to the cool-looking garnish on our plate of food. Since few people “post” low points in their life, these social media sites create the impression that everyone is having fun or exciting experiences all the time. The digital age has created an epidemic of “Fear of Missing Out” or FOMO.

Possibly as a result, sadness and depression among teens is on the rise. Between 2010 and 2016, the number of adolescents who experienced at least one major depressive episode leaped by 60%, according to a nationwide survey conducted by the U.S. Department of Health and Human Services. This follows a period during the late 1990’s and early 2000’s when rates of adolescent depression and suicide mostly held steady or declined. A sudden increase was noted in 2012 when smartphones became popular. Using data collected between 2010 and 2015 from more than 500,000 adolescents nationwide, psychologist Dr. Jean Twenge found kids who spent three hours or more a day on smartphones or other electronic devices were 34% more likely to suffer at least one suicide-related outcome—including feeling hopeless or seriously considering suicide—than kids who used devices two hours a day or less. Among the kids who used electronic devices five or more hours a day, 48% had at least one suicide-related outcome. Kids in the study who spent lower amounts of time engaged in face-to-face social interaction, but high amounts of time on social media, were the most likely to be depressed.

Meaningful interpersonal engagement with others and sustained, attention-demanding activities and learning protects children against feelings of isolation and depression. Smartphones and other screens too often enable kids to “hide in plain sight,” as the author of the book Wired Child, Dr. Richard Freed, notes. Most people of my generation find it disturbing to see a group of teenagers staring at their phones or texting while sitting among actual friends. Recent surveys of teens reveal that 34% “somewhat” agree that social media detracts from the time they could be spending with others, and 44% agreed that it distracts them from the people they are with in person. In often oppositional “teen speak,” this is off-the-charts agreement. As for parents, use of mobile devices has been shown to considerably reduce the quality and quantity of parent-child interaction, which is crucial for the child’s overall development.

Neurobiology findings may explain the negative impact of too much exposure to digital media. Research has linked social media, video gaming, and other phone-based activities to increased brain dopamine production, which helps drive our risk-reward system. The impact may be a decrease in ability to modulate focus, attention, and self-control in less stimulating everyday activities. These skills are particularly needed for later adult success and happiness. Children may be more prone to gambling, or other high-risk activities, to satisfy their screen-time-enhanced need for “feel good” brain chemicals.

In addition, media multi-tasking (MMT) may be insidiously diminishing our ability to prepare for the future and perform challenging tasks. According to a 2010 Kaiser Family Foundation study in 2010, 29% or our digital media time is spent “media multitasking.” In other words, we are looking at our screens while we are interacting with others, working, or doing homework. A growing body of research suggests that MMT disrupts concurrent learning, and heavy MMT may be associated with cognitive differences when people are performing every day cognitive activities beyond the classroom. Studies of brains of people who frequently media multitask have even revealed lower brain gray matter volume in parts of the brain involved in cognitive and social-emotional control.

Confession # 4: I don’t know what to do about this!

As a pediatrician (and father), the last thing I want to do is “throw out the baby with the bathwater!” After all, most of the studies so far explain that digital media is associated with all the problems discussed above, but is not necessarily the root cause. In other words, other factors may be causing depression and anxiety. People who are already prone to these conditions may gravitate to using devices more. Similarly, people who already have lower brain volumes in certain areas, possess lower social IQ’s, or have more difficulty with attention and other executive controls may be the ones gravitating to the screens. The screens may not be the culprit.

Even more importantly, technology just may be making us smarter and better learners. The ability to research anything at any time surely cannot be all that bad. “Googling” the preferred worm delicacy of the star-nosed mole is far more efficient than finding the answer by thumbing through Encyclopedia Britannica or going to the library stacks. Although based on correlational data, some video game players have even been noted to have superior attentional, processing, and visual representational skills. Playing Call of Duty could theoretically hasten the call of the job offer!

Socially, we may also be better off in some ways with digital media. Formerly marginalized groups, such as people with disabilities, can now find peers and support much more easily than ever before. This is a relief, to say the least. Also, digital media can be used to supplement, enhance and even deepen already existing relationships. I vividly remember having to set up “phone-chains” to try to get a group together. Now, it takes a few sentences, possibly an emoji, and of couple of clicks! Finally, emotional expression in cyberspace is easier than in person. Perhaps this can be harnessed for better, deeper communication.

Regardless of what research on digital media currently proves—harm, benefit, or a combination of both- I find it hard to believe that all this screen time exposure is not actually causing problems in how we are developing as individuals and evolving as a species. In the 1980’s classic, “The Gods Must Be Crazy”, a glass Coke bottle falls from the sky and wreaks havoc among isolated, but harmoniously co-existing, African villagers. They do not know what to do with this radical new device and the materials from which it was constructed. Confusion and conflict ensues. Similarly, the smartphone has fallen among us. Our brains and bodies, which evolved over thousands of years, do not know how to incorporate this new piece of technology. It may take a thousand more years for scientists and historians to fully sort out. However, we cannot wait for the research to guide us. We must act now!

Here are a few suggestions:

You would not let your child roam around the city with its hidden scary predators, violent criminals, and places of ill repute. Why let him roam the Internet, which has a reach far beyond our city boundaries? Try to hold off on getting your child a smartphone as long as possible and monitor iPad and computer use closely. If your child must have a phone to contact you, consider going “old school”—flip phones still work well! In addition, multiple programs exist to allow tracking and monitoring of electronics usage. This may seem like spying on your child, but think about the “city roaming” analogy. Check out this website for a great up-to-date list of products that are free and for purchase to help you make sure your child is using technology safely.

Create space to discuss the need for technology in your family. This is almost certainly a very sensitive topic for your children. Consider a regular weekly time to “negotiate” technology usage. Remember, your child may have needs that you have not considered. Keep an open mind. Write a “Tech Usage Contract” with your family, and use it to stimulate weekly conversation. These links offer guidance on regular technology talks and electronics usage contracts.

Get the screens out of the bedroom! Most kids require ten or more hours of sleep a night. Studies show screens in the bedrooms interfere with sleep onset and can disrupt the quality of sleep. Screens in the bedroom are also harder to monitor. Consider having a central nighttime “docking station” for all family electronic devices.

Get rid of the phones at meal times and other gatherings. Make this part of your family “contract.” Time spent casually speaking with family and friends prepares us for life. Social and emotional intelligence determines success and happiness more than new information or tech savvy. “Hanging out” is where we hone these skills.

Technology is cool! Despite some people’s nostalgia for the pre-tech era, we are not going back. Your kids are likely to remain one step ahead of you. Keep an open mind and learn from and with them!